Get out and Explore El Nido! 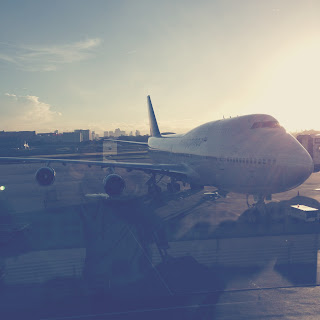 Mabuhay! It's been five months, i haven't updated the weekender since January 2013. Yes! It's about my adventure trip in El Nido with friends. One of our destination was voted by thousands of travelers as the top 25 beach in Asia this year via online travel guide TripAdvisor.com’ Travelers’ Choice 2013. What?! I’m very excited to share with you. 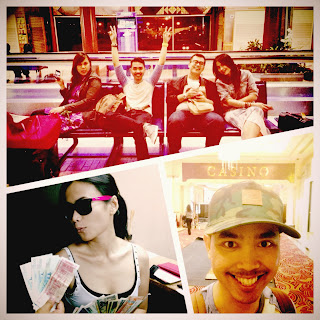 It was not an easy trip to El Nido. Philippines airlines carried us from Jakarta to Manila in the midnight, transited in Manila for six hours then jumped to our seat on PAL airlines to Puerto Princessa. If you are going to transit in Manila, I recommend to go to Resort World Manila. You will find restaurant and shopping mall but they will open at 11 PM. You also can find MC Donald and Seven Eleven nearby Resort World Manila. There’s free shuttle from airport to Resort World Manila.
Our afternoon flight from Manila to Puerto Princessa got delayed, so we have to take last shuttle van to reach El Nido. Shuttle van left Puerto Princessa at 7 PM. It took five hours to reach El Nido, Palawan. It was dark and bumpy road. If you are leaving in the morning you will see beach and cliffs. Our shuttle van arrived in El Nido at 1 AM in the morning. It was quite morning in El Nido. Shuttle van drop us in terminal in El Nido, in front of the market.

Our hotel reservation was in Golden Monkey El Nido. It’s in downtown of El Nido. Threecycle dropped us in the main street then we need to walk to Golden Monkey El Nido for fifteen minutes. We passed a cemetery at that night, at the beginning I didn’t feel afraid at all because I feel so tired, I need to sleep on my bed after a long trip. Something happen on our second night in El Nido. 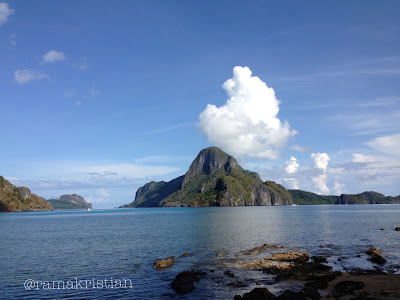 I woke up with the best feeling in the world, i saw beautiful scenery in front of my room. I would love to see it every day. One day, i will spend my life in an island. For now, let's go for an island hopping. An island hopping is a must in El Nido. It's easy to arrange your tour - island hopping in El Nido. You can book everywhere, from your hotel to tour provider. Four packages are A, B, C, D. The good news is same price everywhere. I guess there's standard price from government. We started our first day with El Nido Tour A. Tour A is the most famous package in El Nido. 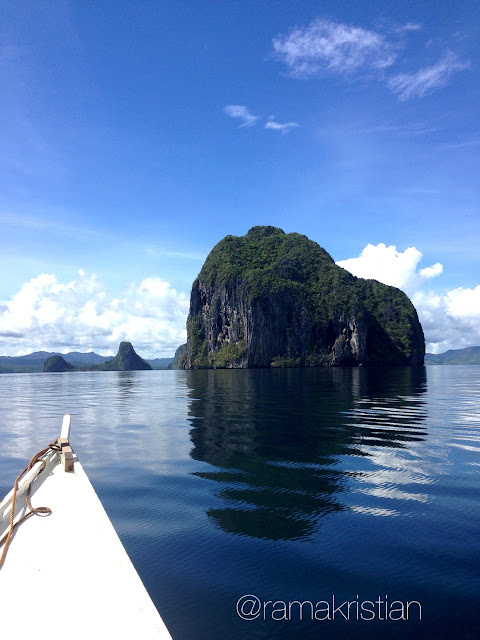 Secret Lagoon is located in small island remiscent of the movie “the Beach” surrounded by limestone karst cliffs. As you enter a small hole, you will see massive caldera that once a cave which collapsed and now is surrounded by karst cliffs. In the middle is lagoon.

Small Lagoon is located on the cove of Miniloc Island. As you enter a small swim through a hole on board a kayak or swimming through, you will see turquoise-green waters of  Small Lagoon of its orchid-lined limestone walls, a showcase a kaleidoscope of marine life.

Big Lagoon -  a visit to Big Lagoon is a running tour on board the outrigger boat, approaching the lagoon in the middle of karst limestone formations you are welcomed by water so clear and full of marine life. Big lagoon is a breeding ground for fishes and crustaceans. 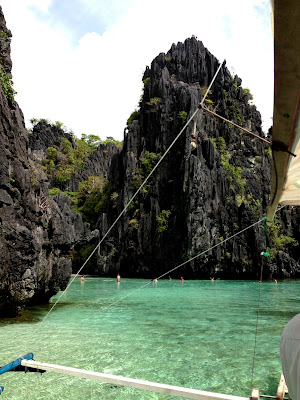 Our boatman prepared our lunch in front of huge rock looks like a cave. The main course is fish but i love the dessert, fresh mango and pineapple. I would love to recommend you to bring snacks while you wait our boatman cook our lunch. It takes time to cook so you can chat with your mate while eat your snack.

Seven Commandos Beach – The final destination after long day on tour. Seven commandos is named after the 7 remining Japanese commandos who lived in the island as straglers after world war II. The Island has a long white sandy beach lined with palms trees.

Laying down while enjoying caprinha, or San Miquel - local beer is one of relaxing activity after an island hopping. Widhi and i always love to taste local beer every time when we travel. We want to embrace local culture.
The next day, island hopping with Tour C package. Prepare your swim wear, swim gear, uv protection, sun glasses, and the most important is mineral water. You will exhausted after snorkeling or swim in the sea. It would be great if you have your morning breakfast before your activity. If your captain asked you to wear live jacket, please wear it properly due to our safety.


Tapiutan Island - Further out of the bay facing the South China Sea, Tapiutan's rich marine life provides opportunities for scuba diving and snorkelling. One of the most striking islands in El Nido because of its shape and sheer limestone walls. It is possible to have picnic lunch at the beach area on the southeastern side of the island.
Matinloc Shrine - Hidden among the lush forested island is the Matinloc Shrine (also known as Shrine of Our Lady of Matinloc and Shrine of the Blessed Virgin) a sacred monument built in 1982 to honor the blessed virgin mary. 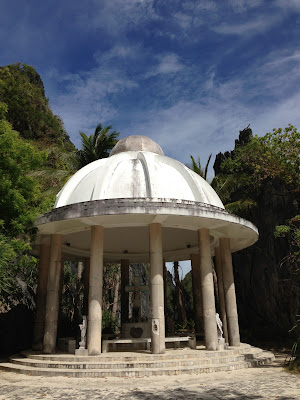 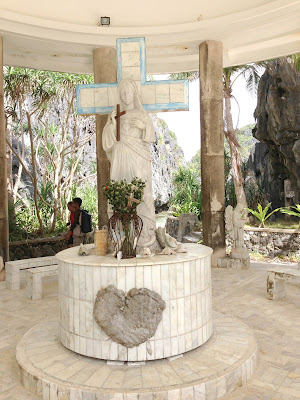 There is one place that caught our attention on the islands of El Nido, namely Matinloc Island. From a distance it looks like a private resort. The captain took us to the island after lunch, and it turns out that the building is an old church. Church renovated into a hotel - a combination church and hotel. It visited during the celebration of that time. It was said Church is abandoned by the owner due to a ghost. Sometime in the early 2000s there was a ghost of a beautiful woman as a fairy that annoys workers and hotel guests. The captain of our boat is a living witness who had seen the ghost according his confession.

Apart from that, The view from the top of the cliff were breathtaking, we can see sea with blue and green color degradation in front of you. The view is absolutely beautiful. I feel like I’m in Raja Ampat, Indonesia. 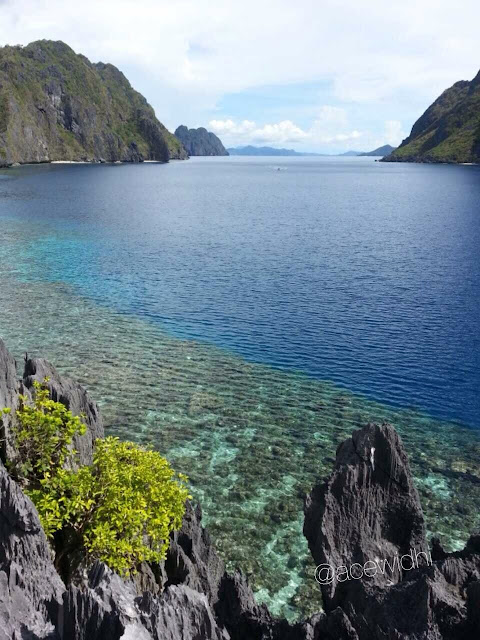 After returning from Matinloc Island we were discussing about the urban legend in Matinloc. It was cold and humid after rainfall, we need to pass the cemetery for the third time. Everyone looks fine after talking about mystical in Mantinloc, enjoying the way back to the cottages. We heard something fall from the garden next to the cemetery. Tatha asked me go before our friends. As a result, we’re all run together. Towards the end of the cemetery, we heard dogs howled so loud and barking at us. The dog never barked  to us before. The poodle – cottages guardian directly barking into back towards us as extrude something. Since that incident some of us couldn’t sleep all night, some of us feel anxiety, fear and hear something outside. It’s like in horror film.


Dilumacad and Helicopter Island - This island has a beautiful white sand beach stretching to some 300 meters that is ideal for picnic lunches during island-hopping trips. There is an underwater tunnel at its northern side and a fringing reef on its southern end. The island is also called Helicopter Island because its limestone cliffs resemble that of a helicopter when it is viewed from a considerable distance.
One of our friend left El Nido earlier. Lydia should come back to Jakarta due to work. Only four of us survived in El Nido.We're craving for beach, and adventure so we decided to have Tour B. I admitted i am not fit enough because i haven't enough sleep because the urban legend. I was panicking in Pinagbuyutan island because i couldn't wear my masker properly. The day before i did snorkeling by myself and it was okay. I feel something weird on that day, maybe it just my feeling. Tatha almost lost her sun glasses while snorkeling, fortunately we could found it.

Pinagbuyutan Island has soft powdery white sand comparable to the world's best beaches. The water is shallow for about a couple of meters from the shore and then a few meters away you will see a snorkeling area full of fishes. Get captivated by the emerald green color of the water and the phenomenal seascape fronting this island.


Cadugnon Point and Cave - It is an important anthropological site, where jewelry and pottery dating back to the Sung Dynasty (960-1279 BC) were yielded. The anthropologists believe that the cave dwellers were from Borneo, and travelled across the ancient land bridge that connected Palawan from Borneo. A small opening hidden among the rocks near the beach reveals a cathedral like cave inhabited by sea sparrows. Inside you’ll see spectacular rock formations and a way to climb a small limestone hill. A truly wonderful experience. 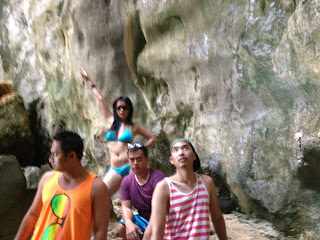 Pinasil Island and Cathedral Cave - The island has a cathedral-like cavern accessible by dinghy and kayak. Its cool interior is lit at certain times of the day by sunlight coming through an opening at its peak. This one of important sites for the busyadors or the birds' nest gatherers.

Vigan and Snake Island - Located near Pangulasian Island, it is also referred to as, "Snake Island," because of the fine natural sandspit (s-shaped sandbar) that "snakes" off it shores. The sandspit is clearly visible only when the tide is low. On both sides of the sandspit are shallow swimming areas. Climbing the hill of the nearby island provide a glimpse of an awe inspiring seascape and a bird's eye view of Bacuit Bay while the boat crew prepare a sumptuous meal.


I am pleasure seeker, i am seeking pleasure. I tell the truth that i had great time in El Nido. My eyes can not handle the beauty of El Nido. If you ask me why i'm going to El Nido, since i came from a country where beautiful beaches lies, my reason  is i want to enjoy the beauty of nature. Nature's gift to adore. One day, i will not regret that i live my life to the fullest.

"Travel makes one modest, you see what a tiny place you occupy in the world." - Gustave Frank Herbert

Should i travel to a new country or explore my own country?

@ramakristian
Denpasar, Bali, Indonesia
I train, travel, and write. get more visuals on my instagram @ramakristian. coming back for blood. I dream to launch a book but untill then enjoy word by word every Wednesday dan Friday.